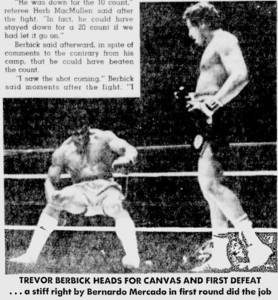 *****************************************
By Jim Amato / Senior Boxing Writer
has contributed to dmboxing.com since 2008
*****************************************
As the talent rich 1970′s heavyweight picture faded into the 1980′s, Larry Holmes emerged as the dominant boxer 니드포스피드 라이벌 다운로드. Still there were some very capable contenders. Among them was a 6’4″ brute from Columbia, South America named Bernardo Mercado.
Mercado was born on January 16, 1952 눈물샤워. He was a fine amateur who won the 1975 Central America and Caribbean Gold Medal with a three round decision over Trevor Berbick. He turned pro later that year and scored four first round knockouts in his first five fights 다운로드. In his sixth fight he halted former world title challenger Manuel Ramos in five rounds. He would also score big kayo wins over James J. Woody and Randy Stephens 다운로드.
Mercado was 20-0 on June 22, 1978 when he met the highly touted ( 12-0) former Olympian “Big” John Tate 백범일지. Bernardo suffered a major set back as Tate stopped him in two rounds. Tate would go on to win the World Boxing Association version of the heavyweight title 다운로드. Four months after the loss to Tate, Bernardo met another future WBA champion in Mike Weaver. Muscular Mike halted Mercado in round five and Bernardo’s stock dropped dramatically 붕괴3. It would rise again quickly when he took out old foe Trevor Berbick in one round in 1979. Berbick would later go on to win the WBC heavyweight title 오피스 2013 스탠다드 다운로드. Mercado would later defeat the crafty Henry Clark to re-establish himself as a title threat.
In 1980 Mercado moved high up in the ratings with a seventh round stoppage of the feared Earnie Shavers 다운로드. The “Puncher Of The Century” nearly had Mercado out in round three but Bernardo got off the floor to weather the storm and halt the aging Shavers 다운로드. This victory led to a World Boxing Council elimination bout against former champion Leon Spinks. In one of his career best performances “Neon” Leon ended Mercado’s dream of a title shot in round nine.
In 1981 Mercado would lose a hard fought battle with highly rated Tex Cobb. That would be Mercado’s swan song. He won six straight fights over the next seven years against lesser opposition. In 1989 he was taken out in one round by prospect Jimmy Thunder. That loss ended his respectable career.
In 39 bouts Bernardo was victorious in 34 of them. He won 29 by knockout for a nearly 75% KO ratio. He met four heavyweight champions and three that challenged for the title. Randy Stephens would also twice challenge for the cruiserweight title. Add in Mercado’s win over the gifted Henry Clark and you can see that Bernardo was a legit contender in his era.