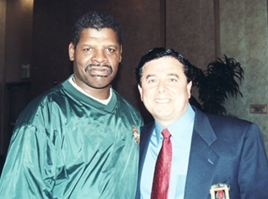 By Tom Donelson ( Member of the Boxing Writers Association and International Boxing Research Organization ) Butch Lewis was a colorful promoter who learned his trade under Bob Arum and even promoted some of Ali’s fight with Arum but he was the man behind the Spinks brothers.  He managed Leon’s career to great heights early in his career.  After winning the Olympics, Leon won his first seven of eight fights with the other being a draw against Scott LeDoux 윈도우 10 스팀 다운로드. Ali set up a fight with Leon Spinks but Spinks upset the “Greatest” winning the title with a split decision. For one night, Spinks was the greatest but that came down quickly when Ali won an easy decision in New Orleans Superdome in the rematch 제빵왕 김탁구 다운로드. A few months later, South African heavyweight Gerrie Coetzee knocked Leon Spinks down three times in the first round and from that point Leon Spinks moved from being a top contender to mediocrity.  After losing a heavyweight title to Larry Holmes, he moved down to cruiserweight but he never won a cruiserweight title 다운로드. By the end of his career, he was merely an opponent; fighting in his brother shadow. Michael Spinks was the reluctant warrior but he proved to be a great light heavyweight before moving to heavyweight.   Lewis not only took Leon to a title but he managed his younger brother Michael to greater heights including a 13 million dollar pay day against Mike Tyson. From 1981 to 1985, he dominated the light heavyweight division in a division deep in talent including fifteen round decisions against Eddie Mustafa Muhammad and Dwight Muhammad Qawi. He upset Larry Holmes, who was going for his 49th straight victory to beat Rocky Marciano.  In a close fight, he won a unanimous decision against Larry Holmes and won a second controversial split decision in the rematch. He continued to win heavyweight fights and Lewis decided to have Spinks not participate in HBO heavyweight title tournament.  This proved profitable as Spinks nearly made three times what he would have made if he won or faced Mike Tyson in the tournament.  Spinks lost his big fight in one of boxing shortest heavyweight fight but he made over 13 million dollars.  After the fight Michael Spinks retired.  His brother continued to fight some eight years longer but never reached the success of early in his career. Leon had the talent to be a great cruiserweight and solid heavyweight but he never had the same focus as his younger brother, who reached great heights as both a light heavyweight and heavyweight.  Many boxing fans may remember Michael Spinks for his last fight but they forgot his first thirty first fight and many championship victories.  As for Lewis, he took two brothers out of poverty in Saint Louis and made them rich men.   dmboxing.com note:  Butch Lewis passed away on July 23, 2011 … may his soul rest in peace in heaven with the Lord.