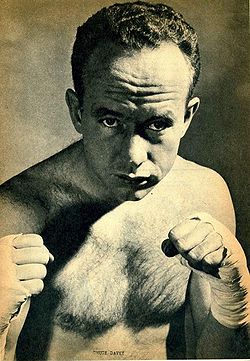 A fighter than has been lost in the shuffle in boxing has to be top welterweight contender Chuck Davey 엑소 로또 다운로드.

An amazing boxing master who was a four-time NCAA champion at Michigan State, he completed an amateur career of 93 victories in 94 fights windows 7 공식.

Davey had wins over five world champions which were Ike Williams, Joe Brown, Johnny Saxton, Carmen Basilio, and Rocky Graziano. In his only title shot, after being unbeaten in 39 fights, he faced Kid Gavilan on February 11,1953 in Chicago.  Down three times in round nine, he did not come out for the tenth round.

Three of his bouts were very memorable.  Against Art Aragon on February 18, 1954, Davey lost a controversial split decision at the Olympic Auditorium in Los Angeles.  Then followed his two fights with arch rival Chico Vejar. Davey won a 10 round decision on May 7, 1952 in Chicago, then, in a rematch the following month, knocked out Vejar in Detroit on June 25.

His career from start to finish was outstanding. He earned both a Bachelor’s degree and postgrad Master’s in college, was a three-time captain and three-time MVP of his college boxing team, and was the youngest during that time, at age 17, to win an amateur national title.

His official ring record was 42 wins, 5 losses, and 2 draws with 26 wins by knockout.

After retiring from boxing in 1955, Davey went on to be a successful insurance businessman, a Michigan boxing commissioner, and president of the U.S. Boxing Association.

Davey was paralyzed after breaking his neck in a 1998 body surfing accident in Costa Rica. He died peacefully at the age of 77 at his Birmingham, Michigan home on December 4, 2002.

One thought on “Chuck Davey”