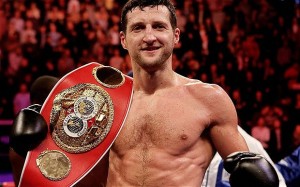 By David Martinez / dmboxing.com
Carl Froch (33-2 / 24 by KO) knocked out British rival George Groves (19-2  / 15 by KO) In the eighth round to retain his WBA / IBF super middleweight titles in a rematch in front   80,000 fans at Wembley Stadium and shown on American television HBO, on May 31. Groves started the fight fast winning the first four rounds, on my scorecard,  before Froch came on in the fifth round 다운로드.
Although not in dominant fashion, Froch won rounds six and seven, on my scorecard, before flooring Groves with a huge right hand with less than 30 seconds remaining in the round 천상비 다운로드.
This rematch was in great demand after Froch’s win, last November, in a controversial quick stoppage when the referee stepped in too soon with Groves, although wobbling, but apparently still able to continue 다운로드. This time no complaints from Groves and his corner people.

There is already talk of a possible upcoming fight for Froch against Mexican Julio Cesar Chavez, Jr., which would draw the lights out if they were to meet at 168 pounds. But my feeling is, Froch (age 36) will next fight former Olympic gold medalist, southpaw, James DeGale (age 28) who won impressively by knockout on the undercard. This fight is a natural and would draw big in the UK between the two British boxers. A rematch against Andre Ward would certainly delight the fans to unify the titles – but that is unlikely to happen in the near future!