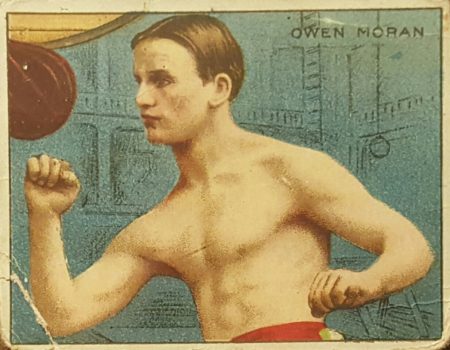 When people ask me “who was the toughest and roughest boxer never to win a championship”, although I can think of many, my first response is Owen Moran 다운로드.

Born in Birmingham, West Midlands, United Kingdom on October 4, 1884, he was one of England’s finest that fought as a flyweight, bantamweight, featherweight and lightweight 다운로드. His nickname was “The Fearless”.

Moran started his professional career on December 3, 1900, just two months prior to his seventeenth birthday 백범일지. He fought all the top fighters of his era, and once fought two men in one night, winning both by knockout in the first round.

In 1908 he fought Abe Attell twice for the featherweight title, with both fights ending in a draw, and in 1910 they later fought three more times in non-title fights that ended with two Attell wins and a draw in that trilogy 붕괴3.

Boxing Historian and founder of Ring Magazine, Nat Fleischer, ranks Moran as the #3 greatest lightweight of all time, right behind Joe Gans and Benny Leonard 다운로드.

The photo posted with this article is an original rare card that I have had in my personal collection for over fifty years 다운로드.

One thought on “Owen Moran”