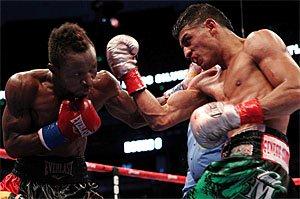 Showtime featured the final of their bantamweight championship series featuring Abner Mares fighting Joseph Agbeko for the Showtime championship but before the main event, the raging bull Vic Darchinyan taking on the boxer Anselmo Moreno.  In the opening round, Darchinyan took the attack to Moreno, trying to get Moreno to open up.   At the 1:30 mark, Darchinyan connected on a left that forced Moreno to retreat.   Moreno managed to slip a few of Darchinyan’s powerful left and while Darchinyan managed to connect on a couple of lefts, most of his big shots missed their targets 다운로드.

In the second round, Moreno excellent boxing allowed him to connect on big left hands to counter the left’s coming from Darchinyan and Moreno jab allowed him to control the early rounds but at the 1:30 seconds of the fourth round, Darchinyan finally connected on a heavy handed left for the first time in a couple of rounds 레스토랑 게임. Frustration of Darchinyan showed up as he wrestle and threw Moreno to the ground, which cost him a point.

Darchinyan pressed Moreno in the fifth round and finally trapped Moreno in the corner at the end of the round including a straight left that connected.  Moreno continued to box effectively as he nailed Darchinyan with some solid lefts after right hand jabs while Darchinyan best punches in the round were left to the body 다운로드.

Moreno played matador in the seventh round as Darchinyan bull rushes simply went pass Moreno and in the middle of the round, Moreno nailed Darchinyan with brutal body shots.   By the end of the round Moreno showed a variety of punches including body punches followed quick head shots 미스터 선샤인 5화 다운로드.

Moreno picked Darchinyan apart as he started to throw power shots that slowed Darchinyan, who looked like a fighter with no answers for the slick boxing Moreno.  This continued in the ninth round and through most of the tenth round even though Darchinyan managed to connect on some hard lefts but Moreno showed mastery of the ring 파라노말 액티비티 2 다운로드.

In the final stanza, Darchinyan attacked Moreno with the idea of knocking him out but other than pushing Moreno down, Moreno slick boxing simply avoided Darchinyan attacks and wild left; thus producing an easy decision.  Darchinyan suffered a major setback while Moreno sent a message to the rest of Bantamweight division; he was for real 다운로드.

Abner Mares and Joseph Agbeko both started fast as Agbeko used his jab to set up his combination as he started a sustained body shots to slow Mares down.    In the second rounds, both fighters jabbed effectively and Agbeko seemed willing to trade left hooks as Mares connected on a solid hook in between Agbeko left hooks as he trapped Agbeko on the rope to unleashed some additional hooks.  Mares returned to the corner with cut over his right eye and he started aggressively in the third round 다운로드.

Mares showed boxing skills as he was able to connect on solid body shots as follow up as Agbeko continued to throw body shots. By the end of the fourth round, Mares started to garner a little edge despite the cut caused by a hard Agbeko jab.

In the fifth round, both fighters exchanged sharp blows as Agbeko connected on a solid left hook and Mares with a counter right in a fight in which each round is close.  Mares began the sixth round by boxing and connected on solid combinations as his right proved accurate.   Mares appeared to have the edge going into the eighth round as he had connected on more power punches but Agbeko jab appeared to come back as he aimed that jab at Mares eyes, opening up the cut. Mares ended the round by digging into the body against Agbeko.  In the ninth round, Agbeko started the round by jabbing but in the middle of the round, a left hook stopped Agbeko for a brief moment.  Agbeko jab returned over the last thirty seconds.

In the tenth round saw both men delivered blows in a close round that may been determined by a Mares straight left and right near the end of the round.  This was a round featured Agbeko jab and Mares body shots.    The eleventh round saw another tight round until the last twenty seconds as Mares connected with a solid right followed by a series of power punches including three rights punctuated by a left hook.   Mares pressed the action in the last round and ended the fight with a flurry as a wild exchanged ended the fight with Mares getting the better of it.

Mares won the fight by 118-110 by a convincing margin even though the fight may have been in the ring but there was no doubt that he won. For Mares, he became the king of Bantamweight.