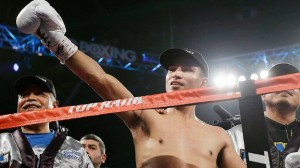 Mikey Garcia (33-0 / 28 by KO), other than being knockdown in round two, was simply flawless winning by knockout over Rocky Martinez (27-2-2 / 16 by KO) to capture his second world title in a different weight division 터보 클리너 다운로드.

The former WBO featherweight champion Garcia fought a masterful fight breaking down Martinez as every round progressed. A left hook to the liver was the telling punch that put Martinez down at 56 seconds into round eight 레지던트 이블 파멸의 날.

After a feel out round one, the action rapidly picked up in round two with complete non-stop action and with Darchinyan getting the better of it. The end came in round nine when Donaire dropped Darchinyan with a left hook and then continued with a barrage of punches before referee Laurence Cole stepped in to wisely stop the bout at the 2:06 mark of the round.  I personally had Darchinyan ahead 78-74 at the point of stoppage.

In the opening bout televised by HBO from Corpus Christi, Texas, Demetrius Andrade (20-0 / 13 by KO) won a twelve round split decision over Vanes Martirosyan (33-1-1 / 21 by KO) to win the vacant WBO junior middleweight title. Martirosyan dropped Andrade with a left hook in the first round, but it was Anadrade who outworked and virtually won most of the rounds to the end. One judge had Martirosyan winning the fight, my scorecard was 117-110 for Andrade.