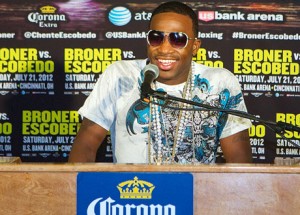 HBO featured the up and coming Keith Thurman challenging Orland Lara and Adrien Broner facing Vicente Escobedo for what was supposed to be a championship belt but Broner came in overweight; forfeiting his title 다운로드.
Thurman opened up in the first round by boxing and connecting on a few more punches than Lara.  In the second round, Thurman unleashed two upper cuts over the last minute and several good power shots but Lara held his own and took those shots 맥북 윈도우 10. Thurman continued to set the pace and near the end of the third round, nailed Lara with a left hook that staggered Lara for the first time.
Thurman began the fifth with heavy handed punches that landed accurately but Lara continued to press the action as he took those heavy handed shots to get one shot at Thurman.  Thurman continued his jab to set up his power shots and throughout this fight, he landed numerous body shots.  At the two minute mark of the sixth round, he shot a jab, followed by a half hook which staggered Lara and a right hand shot through Lara’s defenses and this sent Lara down.   Lara got up barely at sixth but he look to corner and said, “Enough.”   Thurman out punched Lara by a three to one margin and showed that he may be ready to move up when it comes to competition.
Broner came into the bout overweight for a fight that was for his super featherweight WBO title!  Vicente Escobedo came down from lightweight to fight for the title but only to find that Broner was fighting as a lightweight!  Only in boxing where only one person in the ring can win the title and the other is merely fighting for the payday.
Broner’s speed became obvious as he worked behind the jab and while little was accomplished by either fighter; Broner held the slight advantage over the first three minutes.  At the end of the second round, Broner nailed Escobedo with a right hand and then proceeded to land a series of combinations to win the round.
After four rounds, Broner was easily beating the game Escobedo, who occasionally connected with his left hooks but Escobedo was getting out punched.  In the fifth round, Broner decided to walk his opponent down and connected with body shots followed by head shots.  Broner forced Escobedo to the ropes and nailed Escobedo with vicious body shots. In the sixth round, a Broner’s right hand bloodied Escobedo nose and with thirty seconds left, a Broner combination that included a left hook, right hand, right uppercut twisted Escobedo head around which led Escobedo’s corner to stop the fight.
What did this fight show?  It showed that Broner is a talented boxer but this fight had a disturbing aspect to it.  Escobedo came down in weight but Broner had no desire to come in the targeted weight.  Escobedo may have been weaker due to the weight loss and Broner had the advantage of being the bigger man for this fight.  Escobedo fought because he was offered extra money to help with new baby at home.  Broner broke the rules and made it clear that he didn’t care.  This showed a lack of professionalism on Broner’s part.  Broner may be a great young fighter but this showed a sign of immaturity that could come back to haunt him.  Contrast this Keith Thurman who showed smarts in the ring and professionalism outside.
Send Email
Add to Contacts
Edit Contact
Send SMS/MMS
Add to Contacts
Edit Contact