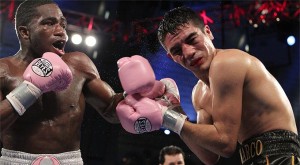 By Tom Donelson
Member Boxing Writers Association
Adrien Broner moved up to garner a second title against the tough Mexican fighter Antonio DeMarco for DeMarco’s title 뮤직 천국 다운로드. Before the main event, Seth Mitchel continued his march toward a heavyweight title against Johnathon Banks. Banks began his career as a Cruiserweight and was positioning himself for a career as a trainer but his goal was to show what he could do as a fighter against young fighter on the rise 다운로드.
In the opening round, Mitchell nailed Banks with a solid right which forced Banks to hold 액세스 2016 무료 다운로드. Mitchell followed up with two nasty body shots that forced Banks to hold on a second time and Banks continued with solid body shots.
In the opening minute of the second round, Banks set the trap for the less experienced Mitchell as he nailed Mitchell with a right hand that sent Mitchell down. Mitchell got back up but his leg was rubbery and Banks used combinations to control the next thirty seconds. Banks sent Mitchell down with a second right for the second time and as he got up, the referee told Mitchell, “Show me something.” Mitchell looked to survive the round but a final combination that concluded with a final right that ended the fight. Banks, a disciple of the late Emmanuel Steward, won a major victory. Banks had an interesting month as he finished the training Wladimir Klitschko for Klitschko’s recent victorious championship bout, attended the great Steward funeral and now a major upset. Mitchell lost his first fight and now he is back to drawing board as he attempts to become once again a factor in the Heavyweight division.
Broner faced his biggest fight in DeMarco and he was coming off a controversial victory. In his last bout, he won an easy victory over Vincente Escobedo but he failed to make weight before the fight. He did not show the professionalism to make weight and it appeared that he didn’t even attempt to make weight to begin with. Now he faced a big puncher in DeMarco.
The first round was hardly a busy round for either fighter and the best punch was a right hand by Broner in the last thirty seconds but neither fighter fought at a quick pace.
DeMarco started to push the action near the end of the third round, as he attacked Broner’s body but Broner threw the sharper punches. Throughout the fourth round, both men fought inside and Broner quick hands proved decisive as his uppercut and short rights nailed DeMarco consistently. This continued into the fifth round as Broner started to bust DeMarco up as he pounded DeMarco with right uppercuts and left hooks to the body.
With the fight halfway done, Broner had the fight in hand as he landed the heavy punches and DeMarco’s face started to swell up. Throughout the eighth round, Broner continued his assault on DeMarco as he pounded DeMarco’s body with hooks and right hands to the face. With round nearly half over, Broner landed a left to the body followed up with a right uppercut and left hook to the head before concluding a right to the body and a final right hand to the head that sent DeMarco reeling to the rope and down. As De Marco looked to beat the count, his corner waved the right towel to prevent their fighter any more punishment.
Broner looked impressive and while I criticized him for his last performance and what I considered a lack of professionalism but on this night, we saw a fighter who grew up against a bigger and tough opponent. Broner put it all together with good defense to avoid big shots while showing a vast arsenal of punches that included uppercuts, short right hands and left hooks that hurt DeMarco to the body and head.