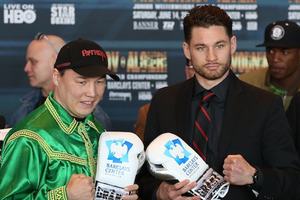 Saturday night (6-14-14) featured two big bouts at the Brooklyn Barclay’s center 다운로드. The first bout featured British Brian Rose challenging Demetrius Andrade for Andrade’s junior Middleweight title.   Within the first minute of the fight, Andrade nailed Rose with a straight left and sent him to the canvas 다운로드. Rose managed to land a solid right over the final minute of the round but the first round was a 10-8 for Andrade.

Andrade used a variety of punches from different angle throughout the second round as Rose seemed perplexed on what to do.  Andrade continued to pummel Rose throughout the third round and one of his right hooks sent Rose down to the canvas for the second time in the fight 다운로드. Throughout the fourth and fifth round, the fight continued its one-sided nature as Andrade simply landed one punch after another with ease.   Rose put his hands up high to keep from getting hit in the head so Andrade moved to the body as he attempted to wear his opponent down.   Near the end of the round, Andrade broke through Rose’s shell defense and landed four punch combinations that shook Rose 도깨비 5화 다운로드.

At the halfway point of the fight, Andrade landed over five times of the punches than Rose and at the beginning of the seventh round, Andrade may have broken Rose’s noses as blood gushed out from the British’s nose.  Andrade continued to assault Rose, forcing the referee to stop the fight 다운로드. 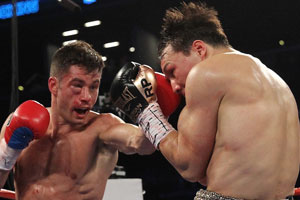 Chris Algieri moved up in class against Ruslan Provodniko and in the first round, the difference in class became obvious as Provodnikov sent Algieri down twice 정무문 다운로드. The first Provodnikov left hook swelled Algieri right eye and in less than thirty seconds, another left hook sent Algieri down a second time.  While Provodnikov may have been the better of the two fighters class wise, but Algieri showed to be a fighter with heart 다운로드.

Thourghout the second round, Algieri boxed and moved but his punches did little to dissuade Provodnikov’s advances.  Algieri managed to avoid many of Provodnikov power shots but Provodnikov continued to pursue his prey 존 윅 3 다운로드.

Algieri continued to maneuver around Provodnikov  with series of crisp shots and while after nine rounds, HBO had it for Provodnikov by seven points but Max Kellerman noted if you give Algieri some of those close rounds where he massively out landed Provodnikov; it is suddenly a closer fight.  Freddie Roach even told Provodnikov after the tenth that he may need a knockout since it was becoming a close fight.  ( HBO Andre Ward even felt that Algieri might be ahead and Max Kellerman admitted that he was allowing the condition of Algieri’s face influence him.)

As the fight concluded, Algieri landed some 80 punches more than Provodnikov and while Algieri never fought on this high level, he showed heart in surviving the first round.  Algieri showed adaptability in using his feet to survive the onslaught and make this fight competitive.  The judges awarded Algieri a split decision with two judges gave it 114-112 to Aligeri and one judge 117-109 for Provodnikov.

Algieri was not in Provodnikov in class as a fighter but he did have one thing going for him.   He was willing to die to win just like his opponent.  Provodnikov admitted that he had trouble with boxers and Max Kellerman admitted that he was influence by group think.  This was not a controversial decision since Algieri certainly did enough to win.  It was case of a young fighter taking his game to another level not previously seen.  I did not see how Algieri could win this fight but on this night; the young fighter dug deep to win against a world class fighter.  As for Provodnikov, he fail to use his jab and did very little with body shots after the first few rounds.  He went head hunting and this is what proved decisive as Algieri slipped many of the big punches coming his way. Algieri fought the perfect fight on a night he needed to and Provodnikov did not.