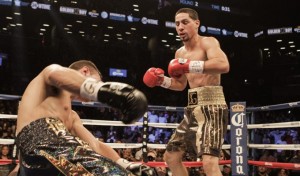 Danny Garcia faced Rod Salka in a ten round bout in which Garcia needed to win big just to restore his reputation after a controversial victory over Mauricio Herrera.  One big story of the evening featured  Daniel Jacob first shot at a title as he faced Jarrod Fletcher.  Jacobs had already one big fight, that one with cancer and now he wanted to be the first cancer survivor to win a title.   Jacobs nearly ended the fight in the first round as he nailed Fletcher with left hooks and right hand 어머니 다운로드. Using a variety of punches landing in combinations that sent Fletcher down.

Fletcher proved tough as he survived the first round and make it a fight over the next three rounds.  Fletcher stepped up the pace but there were times that Jacobs would turn it on and simply out class Fletcher 다운로드. As Showtime Paul Malignaggi noted, Jacobs was the better fighter and when he wanted to, he simply took over the round. Jacobs held back at times but in the fifth round, it came to an end 기생충.

Fletcher came out aggressively and landed some combinations but with thirty seconds left, a Jacobs‘ right hand sent Fletcher reeling into the rope.  A series of combinations sent Fletcher down with two seconds left.  The fight ended as the referee stopped the fight but Fletcher didn’t complain.  Jacobs now has a title to add to his victory over cancer 캐드 2012 다운로드.

Lamont Peterson defended his version of the light welterweight title and over the first three rounds;  he nailed Edgar Santana with left hooks that as one Showtime announcer noted make Santana liver quiver.

The fifth and sixth round were essentially fought in a phone booth as Peterson nailed Santana with one big left hook after another left hook along with occasional upper cuts but Santana stood up to the punishment.  As Paul Malignaggi noted, Peterson looked like he was hitting the heavy bag as Santana was rarely counter punching back.

This continued through the tenth round and it was the ring doctor who advised the fight to be stopped before the tenth round. Peterson looked impressive and won an easy victory and only hoped for Danny Garcia to win his bout for a unification bout with Garcia.

As for Garcia, he allowed Rod Salka survive the first round but every punch he connected in the second round hurt Salka.  Within the first minute , a left hook started a combination that sent Salka and that was repeated two more times before the referee stopped a fight.

Salka gave a good effort and showed heart but the level of talent was too obvious.  Salka simply had no business to be in the ring with Garcia. 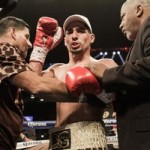 This evening was an advertisement for a possible future Peterson-Garcia and that should be an interesting fight since Peterson is a good boxer and a good body puncher while Garcia is a classic boxer –puncher.   Garcia fought an inferior opponent but he did what he was supposed to do and that was to win impressively.