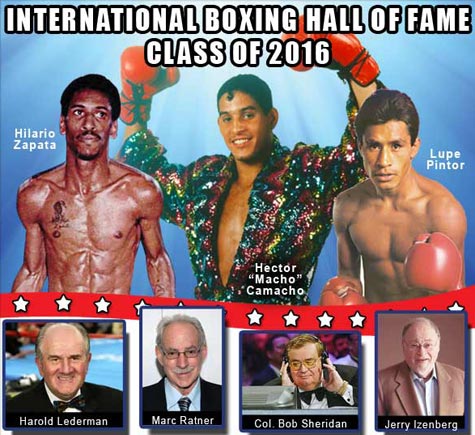 “We are eagerly anticipating paying tribute to the incredible accomplishments of the members of the Class of 2016,” said Hall of Fame Executive Director Edward Brophy 다운로드. “We look forward to welcoming them to Canastota to take their place in the Hall of Fame.”

“It is so exciting to think that the new inductees will be boarding airplanes less than two weeks from now to make the trek to Canastota to receive boxing’s highest honor.”

Mexico’s Pintor was bantamweight and super bantamweight world champion, Panama’s Zapata was light flyweight and flyweight champion, Lederman was a 30-year boxing judge and is HBO’s “unofficial” judge, Ratner was the highly respected executive director of the Nevada State Athletic Commission, journalist Izenberg has covered the sport of boxing for over 50 years and broadcaster Sheridan has traveled the globe calling action from ringside for nearly 50 years. Each living inductee will receive a Hall of Fame Induction Certificate and gold Hall of Fame Ring.

The Class of 2016 also includes posthumous honorees multi-division world champion Hector “Macho” Camacho in the Modern category; featherweight champion Petey Sarron in the Old-Timer Category; and trainer Whitey Esneault in the Non Participant Category. Inductees were voted in by members of the Boxing Writers Association and a panel of international boxing historians.

For more information on the 2016 Hall of Fame Induction Weekend, please call the Hall of Fame at (315) 697-7095, visit online at www.ibhof.com, on Facebook at www.facebook.com/InternationalBoxingHallofFame and on Twitter at www.twitter.com/BoxingHall.