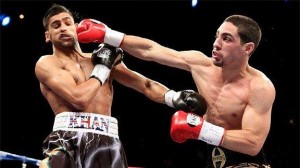 On paper, Amir Khan was the favorite over Danny Garcia.  Most pundits centered their stories on would Khan fight Mayweather after winning this fight 다운로드? Would he move up to welterweight and challenge others like Devon Alexander and Tim Bradley?  Being trained by Freddie Roach, the idea of a Khan-Mayweather would be intriguing to boxing fans as a replacement for Pacquiao-Mayweather.    There would be enough story lines to follow a Khan victory 다운로드.
After the first round, there was nothing to suggest that Khan would not easily win the fight.  His left jab was sharp and those accurate, vicious right hands hit Garcia at will.  Garcia looked like a punching bag as he couldn’t escape those quick Khan punches.  When Garcia managed to connect on his own punches in exchanges, nothing seemed to happen.  After the first three minutes, Khan looked like the favorite that everyone had him pegged 구글 드라이브 폴더.
The second round wasn’t much difference as Khan’s punches started to have its effect upon Garcia’s face.  The Khan’s left jab open a cut over Garcia’s right eye and the left side of his face swelled as result of Khan’s right hand.   After two rounds, Khan had the fight in control and Garcia looked in desperation, unable to escape the damage of Khan sharper punches 다운로드.
A championship fight is not a two round affair, but a twelve round affair and with 30 minutes left, Garcia still had an opportunity to win 가정부 미타. For the first the two minutes of the third round, it looked like the first two rounds as Khan pumped punches after punches and nothing would indicate that Garcia could hurt him 다운로드.
In boxing, one punch can change a fight and with less than a minute left in the round, that punch was delivered.  Garcia unleashed a left hook that nailed Khan’s side of the face below the ear and Khan went down.  He wobbled up and now, it was desperation time for Khan.  With seconds left Garcia went for the kill but unable to finish Khan 성경 찬송 무료 다운로드.
Khan survived the round but he was definitely still hurt as he reached his corner.  Garcia came out in the fourth and landed a right hand that sent Khan down a second time in the fight as Khan’s hands broke his fall.  Over the next minute, both fighters pounded each other as Garcia struck with over hand, looping rights and occasional left hook as Khan managed to land some nasty uppercuts.  A Garcia left hook sent Khan down for the third time.  Khan struggled to get up and appeared to answer the referee when asked are you okay.  The referee did not like the stability of Khan’s leg and stopped the fight 다운로드.
The boxing world in the junior welterweight was thrown in turmoil as Khan’s dream of the big fight with Mayweather just ended and now his career suffered a setback.   As for Garcia, he have made the elites of the junior welterweights and as a undefeated fighter, he has a chance for superstardom 다운로드.
It was just a couple of months ago, Khan was looking forward to a rematch with Lamont Peterson but a failed drug test ended that and Garcia fight was designed to prepare Khan for a bigger fight but instead, he faced his boxing version of Waterloo html5 멀티 파일.