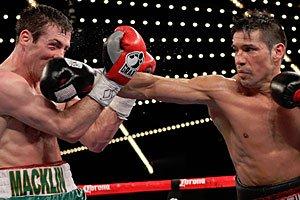 Madison Square Garden was once the mecca of boxing but today, it is one of many venues where boxing matches occur and happens but can anyone truly say there is the Mecca of boxing today?  The answer today is no for while Las Vegas has replaced the Garden as a place where big fights happen in the United States,  the heavyweight divisions biggest fights over the past decade have happened over in Germany where Klitschko’s made their home.  The last time a big heavyweight fight occurred in the United States, where the world care was Lewis versus Vitali Klitschko but after that; nada 다운로드.

Sergio Martinez brought his show to the Garden and put his Middleweight championship on line on Saint Patrick against the rugged Matthew Macklin.  In a place where many of great middleweights have fought, Martinez brought his unique skills to the garden 다운로드. Martinez came into the boxing world late and depended upon his athletic skills to get by but as he got more experience, he developed improved boxing skills to go with his hand and foot speed.  Even at 37, he still had the speed but against Macklin; he was facing a tough fighter who grinded out victories 다운로드.

Before the major event, slicking boxing Edwin Rodriguez faced the big bombing Donovan George and Rodriguez gave George a boxing lesson.  Throughout the fight, Rodriguez moved and jab while setting up some slick combinations.  George was never in the fight as he was easily outpointed even though he managed to win four rounds on one judges’ card 다운로드.

As for main event, Macklin put the pressure on Martinez and while Martinez hand speed was quicker, there were times that Macklin right hand connected sony playmemories. In the early rounds, Macklin kept the fight close as he even managed to land flurries as in the fifth round  as he scored with series of punches over the last thirty seconds and at the end of the seventh round, a Macklin right sent Martinez down for a flash knockdown.   With five rounds left, this fight proved competitive but the flash knockdown inspired Martinez to take his game to another level xcode 10.

The fight ended when Macklin’ s corner ended the fight when they decided their fighter had enough.  Martinez showed himself to be the best middleweight in the world and at the age of 37, he still has the speed and foot movement to beat any other middleweight 다운로드.

Martinez now wants a big money fight with Chavez, Jr. but the real question is whether Team Chavez would risk a fight with Martinez now or wait until they feel he has aged enough to slow down.  As for Martinez, one has to ask how great he would have been if he had picked up boxing earlier than 20 years- old.   Martinez came into boxing as a super athlete and his speed allows him to be an unorthodox technician and get away with tactics that would get other boxer killed.  His instinct and athletic ability has allowed him to progress this far and now he is adding better technical skills to make him a more all-around fighter.

Sergio Martinez is not officially a Middleweight champion but he is the WBC diamond champion; whatever that means and who really cares.  Martinez is the best Middleweight fighter and he showed why last Saturday night as he out fought Matthew Macklin.  Macklin showed toughness and this was an even fight going into the second half of the fight.  From that point, Martinez took over as he took his game to another level and he showed both boxing skills and power.   Chavez Jr. may be the WBC Champion but team Chavez is not anxious for their fighter to challenge Martinez.  The Martinez that fought Macklin would simply wipe Chavez out. Martinez is similar to Roy Jones at his peak as his athletic skills allow him to get away with tactics that other fighters will get killed trying.  He keeps his hands low and sometimes moves straight back but he does feint beautifully so sometimes one never quite knows where those quick hands will end up.

If Martinez is unorthodox, Edwin Rodriguez is the classic boxer-puncher as he jabs effectively and this sets up his other combinations.  He fights like the textbook says you are suppose to, allowing the jab to set up the rest while throwing punches sharp and straight.  He has a variety of punches, jobs, crosses, hooks and uppercuts plus he rarely gets hit with solid shots as his defense is very good as he keeps his hands up to block incoming shots.  His bout with Donovan George was typical Rodriguez as he jab and followed up with combinations while he moved just enough to stay out of the way of George’s haymakers.  George never truly got off and he was often beaten to the punch.  Rodriguez does not have the same athletic skills as Martinez but the difference is that he started his boxing career earlier in his career and was trained in all of the technical skills that will carry him far in his career.

Magomded Abdusalamov is one of those heavyweights that have folks drooling with his power but it is hard to judge him based on his opponents.  His previous two opponents were undefeated prospect but one was an overweight cruiserweight and the most recent, he fought the undefeated Jason Pettaway.  After the opening minute, it was clear that Abdusalamov was miles ahead in skills and talent.  Pettaway had fought weaker opponents and could not match Abdusalamov power.  Abdusalamov is undefeated with every victory a knockout victory but this maybe a reflection of his competition.   Weak opponents mean a lot of knockouts for a talented fighter but we will never know until he fights similar competition.

Seanie Monaghan is a light heavyweight prospect from what the announcer called the Irish Rivera, Long Beach and he showed solid skills against Eric Watkins, but Watkins showed an inner toughness as he took Monaghan best shots.   Monaghan showed solid boxing skills as he mixed his attack, starting with his jab and the hitting the body with vicious shots to go with sharp left hooks and right cross.  Like Abdusalamov, it is hard to judge exactly how far Monaghan really is since it is hard to judge his opponent.  What Monaghan showed is the right boxing skills and like Rodriguez, solid boxing IQ can serve one well in his career.

If Martinez is at the top of his game, other fighters like Monaghan or Abdusalamov, who went into the ring still leave one wondering, are they really as good as their record.