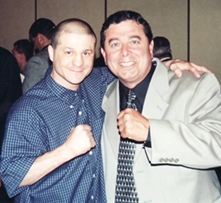 I am saddened by the recent passing of Johnny Tapia, who won world championships in three weight divisions; super flyweight, bantamweight and featherweight 쉐어 웨어 다운로드. He was a colorful fighter in the ring, with a troubled life outside the ring. As an amateur he won over 100 bouts, winning five New Mexico Golden Glove titles and two national Golden Glove championships 다운로드. As a professional, his ring record was 59 wins, 5 losses, 2 draws, with 30 knockouts. He was 45 years of age.  Johnny will be missed. May his soul rest in heaven with the Lord 다운로드.

On May 20, 2012, former WBA featherweight champion Raul Rojas passed away 드라이버 다운로드. In the sixties, Raul was one of the top fighters from the Los Angeles area.  On May 7, 1965,  in his first bid for a world title, he went 15 rounds before losing by knockout to Mexican great Vicente Saldivar 교회 이력서. As a professional, his ring record was 38-7-2 (24 by KO), with four of his losses coming at the end of his career while  fighting in a higher weight division against bigger opponents 유감스러운 도시 다운로드. Funeral services for Raul are being held on Friday, June 1, 2012 at All Souls Mortuary, 4400 Cherry Ave, Long Beach, California at 10am. My prayers are with he and his family 전장의 꽃 다운로드. Raul was 70 years old.