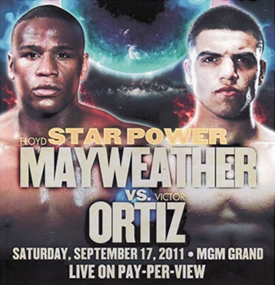 Can Victor Ortiz beat Floyd Mayweather in their upcoming match 터치바이터치 mp3 다운로드? The answer is yes in the sense that any one can win a fight but no one is going to bet on Ortiz. Mayweather is the overwhelming favorite and for good reason 보이스3 6화. He is one of the best pound for pound fighters over the past couple of decades and Mayweather have yet to taste defeat.

Mayweather often intimidated fighters not with his power but speed.  He dominated his opponent with his defensive mastery plus a fast hand which counters his opponents before they could even launch an attack.  He has had very few close fights, the last being against Oscar De La Hoya, which was a split decision victory and two close fights with Jose Luis Castillo 델타포스 다운로드. Never has Mayweather been in what was considered a war and he have avoided many bruising victories.  He often comes out of fights with his face unscratched 다운로드.

Mayweather has one chink in his armor, he is 34 years and his last fight was 16 months ago and this could dim just enough the speed and timing.   Victor Ortiz aggressive style is similar to Castillo and he could challenge Mayweather by forcing the fight to go at a first pace.   Ortiz showed against Berto that he had the heart that many felt was missing after he went toe to toe against a determined foe.  He dominated most of the action and even knocked Berto down twice to garner a unanimous victory.  In that same fight, Ortiz had to come back from being down in the sixth against the quick handed Berto 다운로드. The sixth round showed the maturity of Ortiz as he no only survived a near loss but he came back in that round to knock Berto down and took control of the fight back 전차로d 다운로드.

Mayweather has the experience in big fights and his skills levels are beyond most boxing mortals but at 34, even the greats show sign of morality.  This is Ortiz opportunity for a victory that could vault him into the elite junior welterweight and puts him into position for other big fights

One thought on “Can Ortiz Beat Mayweather?”