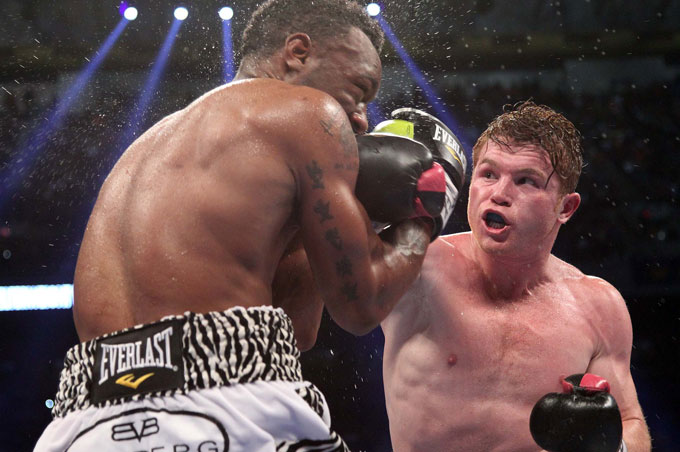 It was one of those fights that could make boxing legends, two undefeated fighters with different styles at the peak of their career 다운로드. Canelo Alvarez, a slugging hard punching Mexican, facing the slick boxing Austin Trout.

It was twenty years ago since Pernell Whitaker was cheated out of a victory and had to settle for a draw against Julio Cesar Chavez in one of the great fights of the 1990’s so Austin Trout had to ask, can I win a  decision in the Alamo dome as almost all of the 40,000 fans were rooting for Alvarez?   For Trout, his strategy was to win decisively and if possible, go for a knockout.  As for Alvarez, he was the powerful  slugger so he could lose every round and still win with one punch 다운로드.

Trout controlled the real estate for most of the first round as his jab kept Alvarez off balanced.  Near the end of the round, Alvarez managed to connect a left hook but before that he launched two wild shots that missed 스위치 디아블로3 다운로드.
Trout continued to jab throughout the second round but Alvarez scored with three big rights that produced the  round big shots.

Trout used his jab to flash some combinations over the first half of the third round and twice pivot Alvarez off the rope while Alvarez did manage to land a couple of rights but he couldn’t land any significant body shots to slow Trout. In another close round, the fourth round saw both men landing jabs and occasional power shots but neither men landed solid combinations.  At this point it was close fight with Trout throwing more punches but Alvarez punches having more pop.  At the end of fifth round, Alvarez showed good head movement as he avoided Trout combinations.  Trout jab was effective and threw thirty more punches but most of them were jabs. Trout managed to land several body shots through the sixth round and while Alvarez started the round fast but Trout body shots slowed Alvarez.

At the beginning of the seventh round, a Alvarez straight right sent Trout down. Trout got back up and fought back. Halfway through the round, Alvarez landed another big right in a round that could have turned the fight. Trout came back in the eighth round as he used his jab to set up his straight left as Alvarez conceded the round.
Alvarez began the ninth some solid body shots and won the first half of the round with his right.   Over the second half of the fight, Trout used his jab and left hand combination.  The ninth round was a close round to score but maybe the right hand for Alvarez may have won him the round.  Trout dominated the tenth round with activity but Alvarez managed to land a few single shots.   Showtime was reporting the judges had Alvarez winning easily after eight rounds, making one wonder which fight were the judges watching.  (One judge had Alvarez winning all of the rounds at this point, which could be called home town scoring.)
Alvarez landed some big rights while Trout threw consistently the jab in the eleventh round.  Near the end of the round, both men landed some bombs against each other in what should  have been hard round to score.   Trout landed solid lefts as he knew he needed a knock out to win as he attempted to grab the title.   Trout won the last round only because Alvarez conceded the round of a fight he already won.
Showtime crew scored this fight close as I did. (I scored the fight 114-113.) The fight was a competitive fight as both fighters neutralized each other offense with some surprising defense.  Alvarez won the fight by 115-112 116-111 118-109 by unanimous decision.    Trout landed more punches and connected on more punches but Alvarez threw the harder punches.  While the judges had the fight wider than I or the Showtime crew had, Alvarez did win the fight.
The most surprising aspect was Alvarez defense as he showed good head movement as he slipped many of Trout punches and that may have been decisive in his victory.  As Showtime noted, Alvarez defense won rounds on their card.  Trout had nothing to be ashamed as he fought a very competitive fight and judges fail to give Trout more credit for his work.  Both fighters elevated themselves but Alvarez was slightly the better fighter.
My Thoughts on the Weekend
Friday night, ESPN had what was called an interim WBA featherweight title. The real question that should be asked, how did Miguel Zamudio get the shot at the undefeated Javier Fortuna. Fortuna overwhelmed Zamudio and it was obvious after the first thirty seconds that Zamudio did not belong in the ring with Fortuna. Sixty seconds later, Zamudio was out and Fortuna had the interim WBA title for what it means.
Tyson Fury is a very big and blustering English heavyweight who decided that he wanted to fight former cruiserweight champion Steve Cunningham.  Yes Fury won by a seventh round knockout but he hardly looked impressive against a blown up cruiserweight, who had only 12 knockouts in 25 fight.  Fury tactics consisted of mauling, wrestling the smaller Cunningham but he was lucky that Cunningham was not a powerful puncher as he nailed Fury with a perfect right and nearly knocked Fury out in the second round.  Fury was lucky to get out of the second round and simply wore Cunningham out by his mauling techniques.  Fury kept his hand lows and if he faced either of the Klitschko’s brothers, it would be good night sweet prince as he showed rawness that is not quite ready for primetime. Personally, I would love to see one of the Klitschko put this blustering Englishman in his place.  He showed little class and little skills other than he is just big mauler.

Showtime has managed to score the trifecta.  This past Saturday, they managed to have the fight to determine the best world best  junior Middleweight with Alvarez winning over Trout.  Next week, the king of the junior welterweights as Zab Judah faces Danny Garcia and then there Floyd Mayweather facing Robert  Guerrero for the recognized Welterweight championship on May 4th.  Showtime has managed to surpass HBO as the premier cable boxing station and I mention in a previous column, this was not due to a decline in HBO coverage but because what Showtime has done to move beyond HBO.  Showtime has managed to work with CBS to expand their boxing coverages.  I have written this before but it is worth repeating, Showtime is making boxing night an evening to enjoy.  They have preliminary fights on Showtime extreme and then move to  main Showtime channel for the main events.  You can see four or five fights in one night,  For boxing fans, this is great as you not only see the main event but future stars on the under card.  In addition, Showtime have managed to get their share of superstars including Floyd Mayweather and with SHOBOX, the Next Generation allows Showtime to build the superstars of the future.

Now I have a few final thoughts of the Alvarez-Trout bout. I hate the open scoring since it changed the fight but what I hate worse are judges who for some reason can’t seem to score fights.  This was a close fight and the final scoring did not reflect what occurred in the ring.  One judge had it 10 rounds for Alvarez and if Showtime reporting accurate, this judge had Alvarez winning the first eight rounds.  As one Showtime announcer quipped, the judge might as well as take the rest of the fight since we already know how he going to score the fight.  What drama that should have existed at the very end with everyone in the arena along with the fighters waiting for the final scoring; we not only knew who was going to win but we had scoring that simply was not grounded on what happen in the ring!  Boxing has two major problems. One is that lack of clarity on who are the true champions and the second is inconsistent scoring.  The Open scoring system combined by questionable scoring dampened what was a close dramatic showdown between two great young boxers!
As for Trout and Alvarez, both fighters showed that they belong to the elite of the boxing world in their weight division.  Both fighters have plenty of growth left but they showed skills and that include defensive skills. In particular, I was surprised by Alvarez head movement which added to Trout difficulty. Trout could not score consistently as many of his punches missed Alvarez, whose head movement allowed him to slip many of Trout shots.