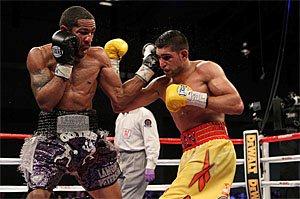 The Lamont Peterson – Amir Khan fight has to be considered fight of the year. Wonderful intense battle by two young elite prime warriors giving it their all. Some brutal blows were landed by both in 12 rounds of excellent high level combat. The speed, footwork, counters, body shots, uppercuts, blazing combinations, were all just wonderful. Kudos to both for showing us what a true championship fight is all about 다운로드.

But what is all this talk of controversy? I saw no controversial fight. I saw no home cooking. Stop trying to make every big boxing fight out to be controversial or a fix. Stop trying to react emotionally, but instead look at matters in a fair and objective manner. It isn’t good for the sport to cast aspersions on that referee, nor are the criticisms of his point deductions fair. I respectfully disagree with HBO and those who say the referee was unfair.

First of all, neither knockdown of Peterson in the 1st round was a knockdown 다운로드. The first was correctly called a slip and a trip. The second was a trip and a push. Right there, for the referee to call that a knockdown shows that he had no bias against Khan. In the heat of the moment, though, referees have to make snap judgments, and sometimes they get it wrong. Happens in the NBA, NFL and the like. Part of the sport. But honestly, watching it live, without the benefit of instant replay, I was not sure whether or not it was knockdown. You have to go with the referee’s judgment at that point 안녕하세요 다운로드.

As for the fouling, the referee was perfectly justified in taking points off of Khan. It is a violation of the rules to hold, to pull a man’s head down, and to push. Amir Khan did all three, and did all three of them incessantly, flagrantly, and despite repeated and consistent cautions throughout he bout by the referee to stop doing these things. You don’t need a referee to tell you to stop violating the rules or he’ll take points off. Every boxer is charged with knowledge of the rules, and every boxer knows that if you keep breaking the rules, you can get points taken off 다운로드. The referee kept cautioning Khan, and yet he did not stop. If a referee does not take points off, then there is no reason for a fighter ever to obey the rules or listen to the cautions. No one whines and moans when a referee in the NFL calls a holding penalty, or illegal contact, etc. If you violate the rules, you get penalized. If you don’t want the penalty, don’t commit the penalty. And when there is a 15-yard penalty for roughing the passer, no one says the official gave the other team the game. They say that player should not have done what he did, that he should modify his behavior in the future lest he might potentially cost his team the game 다운로드.

Do not try to suggest that the referee gave Peterson the fight. Khan gave it to him by breaking the rules and refusing to stop doing so. The referee simply did his job, which is to enforce the rules. If there is no penalty for breaking the rules, then why bother even having a referee in there? Why have a rulebook with fouls? Why not just say there is no penalty for fouls? Because doing so would be ridiculous! Khan held over and over again, and pulled Peterson’s head down over and over again, as well as pushed over and over again 현정아 사랑해 다운로드. These fouls gave Khan a competitive advantage, because essentially all of these fouls prevent a man who has been working hard to get inside and fight the ability to fight once he is inside. Holding not only prevents him from punching, but it is an illegal time out, giving Khan a rest. Pushing prevents him from being on the inside. Pulling his head wears down his neck and makes him more vulnerable to punches having a more serious impact. Ali used the same tactics against Foreman, but did not stop because the referee never took points off.

I say that not only were the two point deductions justified in this fight, but I think there should have been more point deductions, and even earlier in the fight 다운로드. That might have got Khan to stop doing it sooner. And if he did not stop, then keep taking points off until you are forced to disqualify. That’s how it is in sports, and should be. If you break the rules you get penalized. Khan has no one to blame but himself. But I suppose personal responsibility is just about dead, and nowadays we like to blame the police, the judge, and the referees instead.

I feel badly for this referee because he deserves plaudits for doing his job and not being biased by the “name” fighter’s reputation, but fairly enforcing the rules 다운로드. Instead, he is unfairly enduring unwarranted criticism. I say bring back this same referee for more fights and we’ll have better bouts, because he’ll stop fighters from using illegal tactics that prevent fighting and give one fighter an unfair advantage.

This was no controversial decision. Who showed the gamer qualities? Who was the aggressor? Who was ripping hard shots to the body and head and trying to fight all the time? Peterson. To me, Khan was trying to run around, throw quick flurries that often barely landed or grazed or hit gloves, and then run again or then hold or push or pull 다운로드. Khan has no inside game. If he can’t keep you out there at the end of his punches where he can box very comfortably with his speed and footwork, then essentially he takes a whipping and then has to try to foul to get out of trouble. I credit him for showing heart and condition and firing some blazing combos even after getting nailed over and over again, and never getting discouraged, as he showed against Maidana, but I don’t think you can say his losing that fight is controversial. He needs to learn to fight on the inside, and needs to learn legal defensive moves.

All of this explains why Khan needed to foul and could not stop fouling – because he has no answer to the inside game other than to push, grab, and pull 중국 천둥 다운로드. Or he just covers and gets blasted, but he couldn’t keep doing that, so he resorted to all he knew, which was illegal. That’s why he pushed yet again even after the referee had already taken a point off and Amir knew the referee could do so again. He had no other answers.

Regardless, please don’t allow all of this debate to cause us to lose sight of what was a fantastic fight. I would love to see a rematch.