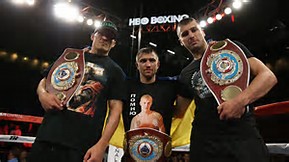 Last weekend on April 8, 2017, it was Ukrainian night at the fights as top Ukrainian fighters led by super featherweight champion Vasyl Lomachenko who simply dismantled James Sosa with ease.  For every punch Sosa landed, he got nailed by four by Lomachenko.  Lomachenko simply looked impressive as he maneuvered around the ring and simply nailed Sosa whenever he wanted.  After nine rounds, Sosa corners decided that enough was enough as Lomachenko outclassed Sosa.  As Max Kellerman noted, Sosa didn’t even win any moment of the fight 다운로드.

The opening bout featured defending Cruiserweight champion Oleksandr Usyk faced off against Mike Hunter.   The first five rounds were even and I even had Hunter up by one round as he moved away successfully from Usyk southpaw stance and forced Usyk to throw his left from a awkward position.  Hunter successfully countered Usyk and had the defending champ on his heel 다운로드.

From the sixth round, Usyk started body shots and took control of the fight.  Usyk started to get his jab and those body shots slowed Hunter down.  Hunter found himself on the ropes and in the twelfth round, Hunter’s strategy was no longer about winning but about surviving the fight against the champion.  Usyk nearly ended the fight but Hunter showed heart despite being given a standing eight count as the rope saved him from hitting the ground.

Usyk simply threw every punch from every angle but Hunter managed to survive the round but still lost a unanimous decision as he lost every round from the sixth round to the very end 다운로드.

Oleksandr Govozdyk showed his overall skills as he took on powerful Cuban veteran Yunieski Gonzalez.  Over the first two rounds Gonzalez tried to throw his over hand right but he found that Govozdyk s had fast hands and great skills.  In the third round, Govozdyk pounded Gonzalez as he stopped the Cuban with an impressive win 안드로이드 누가 다운로드.

What did we learn? First Lomachenko is brilliant boxer, whose style similar to Willie Pep with added power.  He avoids getting hit and is able to counter effectively.  Even though he has nine professional fights, he fights like a veteran with four times that number.  Lomachenko abilities come from nearly 400 Amateur fights and he is simply a gifted athlete was born to be a boxer.  Lomachenko is looking for new worlds to conquer and only wants to fight champion so there is a good chance that Lomachenko will move up to lightweight 다운로드.

Usyk is another Ukrainian whose amateur pedigree has served his professional career as his boxing style shows a fighter who has far more professional fight as he presently has but his amateur background provided the basis for his professional career.  Like Lomachenko, Usyk showed his ability to adopt during the fight as he switched to the body when his jab in the early rounds proved ineffectual.  Once he established his body shots, he then used his jabs and power shots upstairs after softening his opponent with body blows 카카오스토리 사진 다운로드.  The talk about Usyk being a heavyweight might be premature as he showed that he may not have the power to win at the higher weight division.

Govozdyk, like the other Ukrainian fighters, showed good boxing skills to match his power in either hands.  So we witness fighters who could box, move and yet when needed, connect with power to stop their opponents.  These three fighters were all round fighters with multiple skills which is why they have been successful in their young careers sql server 2017 express.